The Monster In The Room 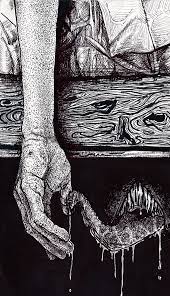 When you’re a kid and scared of something, your parents say, “Don’t be scared. There’s nothing to be scared of,” and you believe them. Why? Because they have nothing to lie about, right? Why would your parents lie to you about something so simple? Well, it’s probably because you don’t actually have anything to worry about, and you’re just a kid scared of the make-believe monster under your bed, or whatever it is little kids decide is scary to them.

When you’re older, the things that are scary tend to actually be scary. It doesn’t have to be a life or death, scary it can be something simple, like anxiety. There isn’t really one thing that scares, but the thing itself that makes those things scary.

For me, dealing with anxiety is like the constant fight to not be scared of the monster under my bed. I know in the small part of my brain that functions without the anxiety and can think rationally, that it’s not real. It’s not actually gonna grab my ankles if I try to get water in the middle of the night, but I can’t shake the feeling of pending doom. That the monster might just grab my ankles and pull me under the dark bed with him. The what-if running through my head on a constant antagonizing loop telling me I’m not good enough and my worst fears really are going to come true.

Anxiety makes simple things like failing a test, having to present a slide show in front of your class, or playing in your orchestra concert seem like jumping off a cliff with no parachute hoping there’s something soft to land on or trying to pick the right wire to cut in the bomb before it explodes.

It’s hard dealing with it, especially when you have to do it yourself. People say, “It’s alright. You can retake the test,” or, “There’s no reason to freak out. Just calm down,” and the voice inside my head says, I know.

I know there’s no reason to freak out or for me to worry, but I can’t help it. I simply cannot calm down. My brain just works that way. I can’t help the way it functions, I just have to live with it. At the end of the day, nobody can truly help me, only I can help me. You can ask for support from the people in your life, but they can’t do it for you. You have to deal with it yourself. You have to pull yourself together, put your feet on the floor, and go get that water from the kitchen.

So, when I finally admitted to myself that I had anxiety, that was the turning point of my monster. I didn’t need to hide from it on top of my bed, hoping it wouldn’t come out. I could put my feet on the floor and fight it. Learn from the struggles it put into my life, and finally know that it wouldn’t grab my ankles and pull me under the bed because I was in control.