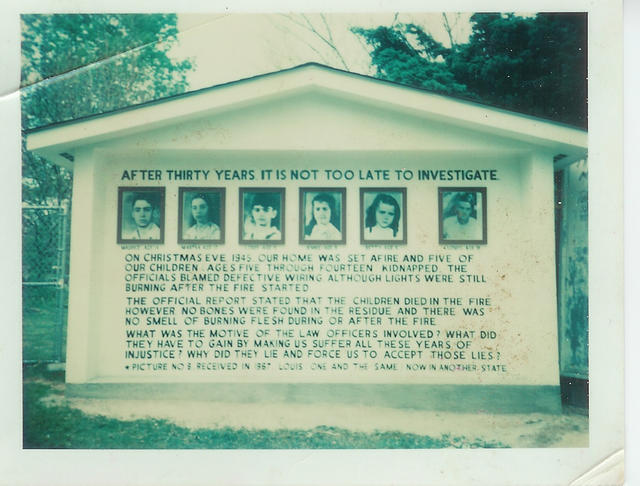 For fans of Snapped and true crime, we all know about the thrilling investigations that go on while trying to decide who killed the victim. It’s easy to become consumed by the mystery and forget the reality of it all. For some of us, we will only be as close to the mysteries as through our TVs, but for others, those mysteries will become their lives.

Holidays are always a time of celebration and happiness. In years other than 2020, it is a time when family and friends gather to celebrate each other and enjoy each other’s company. However, this year was full of unpredictable events and losses. 2020 wasn’t the only year that impacted the reunion of a family during the holidays; in 1945 the night of Christmas, the Sodder family was permanently split apart.

A family of twelve, the Sodder Family lived in Fayetteville, West Virginia. George and Jennie Sodder had had ten kids, so you can imagine family was an important part of their lives. On Christmas day at 12:30 am, their family home began burning down. Rewinding a few hours, five of the Sodder children requested to stay up later, and this may seem irrelevant, but when the house begins burning down, those five were nowhere to be found.

Before the house began burning down, at one point Jennie Sodder arose from her bed to answer a phone call, which was a weird experience itself, as the person on the other end seemed to have called the wrong number searching for someone who didn’t live at the Sodder residence. On the other end, Jennie could hear loud conversations and laughter. Not only the odd phone call, but when the five kids requested to stay up, they were tasked with locking the doors and windows, and turning the lights off. However, when Jennie was downstairs she found everything on and unlocked.

She went back to bed, and shortly after the house caught aflame. George and Jennie ran out of the house screaming for everyone to get out. Only George, Jennie, and four of their kids made it out of the house. When George realized that five of their kids were nowhere to be seen, he tried to run back into the house only to be stopped by flames and thick smoke. Thinking of using the ladder he leaves against the house to reach the upper story, he ran to find it. Given the mysteriousness of the evening, it probably is no surprise that the ladder was nowhere in sight. Plan B was to use one of his trucks, but weirdly enough the truck that was completely operational hours before was now failing to start. He even tried a different truck, both failures.

Now thinking about fires and your house burning down, probably makes you wonder why didn’t they call the fire department? They tried, but their phone lines were cut. Their oldest daughter who had escaped the house ran to their nearest neighbor’s house in hopes of getting a hold of the fire department, but they found no operator response. It’s said that a local at a near tavern saw the large flames, and attempted to call the fire department too, but they ended with the same response. It ended up being that a neighbor drove into town to alert the fire chief. What’s increasingly suspicious and odd is that the fire chief said he was unable to drive any of the fire trucks and they would have to wait.

With nothing left for the family to do, George, Jennie, and four of their children watched as their family burned down to nothing but ashes. It wasn’t until 8am when the fire department finally arrived, long after the fire had gone out and nothing remained of their family home.

Conspiracy and weird things that just don’t add up time. First off, let’s focus on the missing children. It was easy for it to be written off as the kids were dead, but upon further research and investigation done by the family, it became clear that just wasn’t right. Jennie Sodder found that it took two hours for a body to become ashes in temperatures much higher than a house fire after she talked to a local crematorium. There is also the important detail that no one near the fire after or during smelt the odor of burning flesh. This all creates the theory that those kids were not in the house at the time of the fire. This both gave the family hope and despair. Knowing that your kids are alive and you have a chance of reuniting with them is amazing, but the not knowing and the chance that you are never going to know what happened is almost more crippling than knowing that they are dead.

It wasn’t long before there were reports of seeing the five children. A local and family friend believed to have seen them in a strange car. Then 50 miles out of Fayetteville they were spotted at a local diner by a waitress. It was no longer a question of what if, but where are they? George and Jennie offered a $10,000 reward for anyone who could bring their children home. They believed they had been kidnapped, and the fire was a cover-up, but even the large sum of money brought no answers.

Years and years pass with no answers or new leads. Then about 23 years after the fire, Jennie Sodder received an envelope in the mail. There is no return address, just a postmark that told them it was from somewhere in Kentucky. In the envelope was a picture of a young man, who is said to have been Louis Sodder, which was only known by the inscription on the back that said,

That was it. That was the last they heard of anything that related to their missing children. They hoped they would see them once again, but there was never any new pieces of evidence brought forth.

There are so many unanswered questions in this case. There was a rumored sighting by a man at the tavern who thought he saw fireballs being tossed on to the roof. There were various threats on the family prior to the burning. They involved pressuring the family to switch life insurance policies to implying that their wires would cause a fire someday,  which is highly suspicious given the finalized report of the cause of the fire. The woman who called looking for a mysterious person. George’s past with the Italian Mafia. The theories of what happened or could have happened to the children are endless.

At this point, it’s unlikely we will ever have an answer to the mystery since it happened over 75 years ago, but if you want to delve deeper into the crazy of this case you can look at this Smithsonian article and this article from The True Crime Files, to see the different theories and form your own opinion about what happened.