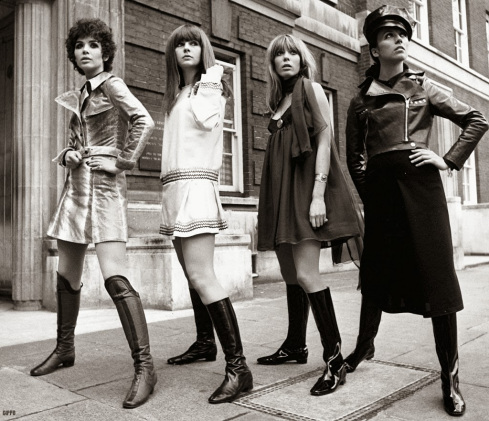 Have you ever watched an old movie and realized how different their clothes are than what’s popular today? Commonly in movies or tv shows their clothes represent how the character is and what social group they are in. For example: in Clueless, their outfits represented that they were popular and rich. This article will explain how “street style” has changed over the years from 1960 to 2010 and how style is being recycled.

In 1960, people were more conservative than they are now so understandably their clothes would cover most of their bodies. The 60s became a time where women could express themselves through their style and hair so around this time women started wearing more pants and “masculine” clothing. Some popular clothing items from the 60s for women were pencil skirts, fit and flare dresses, mini skirts, anything leather, bikinis, skirt suits, floral print, blazers, Bermuda shorts, one strapped dresses, and everything crochet. The 60s is when they started making gender fluid clothing.  If a man wore it a woman could, that was something new for America because of everyone’s mindset and sexist views towards women.

Popular music has always influenced style. One of the best examples of this is the 70s.  The 70s is when disco became super popular, disco has a very upbeat happy vibe so their clothes were very colorful and bright.  Boys would wear short shorts, bell-bottom jeans, suede clothing, pastel-colored tuxedos, and crop tops. You would see women wear bell-bottom jeans, all types of skirts you could think of, caftans, platform shoes, and halter tops.  These clothes are very vibrant and staples of the 70s.

The 80s is when musicians started promoting brands in their music videos and on their daily outings thus contributing to the newfound concept of streetwear. The 80s was a very bold time for fashion. Many popular clothes seem like they took a lot of confidence to wear in public which is super appealing. For example, shoulder pads, psychedelic patterns, high rise pants, full leather outfits, trench coats, and power suits.

The 1990s marked the emergence of African American fashion becoming prevalent in the media. The popularization of Rap as well as R&B music put black artists in the spotlight. Hoop earrings, baggy clothes, and even backward jerseys became extremely popular as they were heavily pictured in music videos and magazines. The black community provided society with many fashion trends that are timeless and therefore still prevalent in today’s fashion world. In the 90s it seemed like everyone was wearing name brand everything. Not only that, but the logos were so big on the clothing it looked like they were trying to promote it.

2000s style was a turning point for style, it went from high waisted pants and bright colors to very very low waisted pants and more subtle colors. Popular clothing items were trucker hats, popped-collar polos, v-neck t-shirts, bowties, cardigans, large digital watches, bootcut jeans, colored skinny jeans, tattoo, and graffiti-inspired clothing, and fedoras. Everyone seemed to have or want the Justin Beiber hair or streaky highlights.  The lack of flavor in their clothing they most likely gave to their hair.

It became popular to wear designer clothing for streetwear in 2010. Before 2010, the only people that would wear designer clothes such as Gucci and Louis Vuitton were very rich people. Now middle-class people seem to wear more and more designer clothing. In 2010 athleisure became super popular, an example of athleisure is matching legging and sport bra sets. Another popular style was normcore, normcore is something that makes you think “my grandpa would wear that.” It consists of very bland coloring and baggy clothing, but nonetheless it was a basic necessity for your closet in 2010.