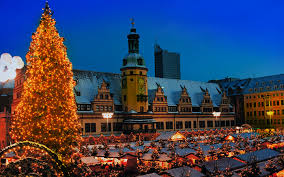 (Image via The Holiday Spot)

Christmas, or Weihnachten, is considered by Germans to be the most important of the major holidays. The holiday season is a time for celebration, contemplation, and family and friends. Not only the holiday itself but also the weeks leading up to the celebration of Christmas involve many traditions and customs of diverse origins.

The German Christmas season officially begins with the first Sunday of Advent. The house is decorated with Christmas branches, Christmas decorations, and candles. On the table is the Advent wreath, a wreath of fir branches with four candles, one of which is lit on each of the four Sundays preceding Christmas. The first Advent wreath, which appeared in the mid-19th century, had 4 larger candles and 19 smaller ones. Every day a new candle was lit – a small one for the working days, a big one for the Advent Sundays. Today only the four larger candles remain. During the lighting of the candles, the Advent song is often sung.

The Advent calendar is a German invention that was originally designed to involve children in the festivities leading up to Christmas. The calendars are usually made of cardboard and have 24 small windows or flaps, one of which is opened on each day leading up to Christmas. Behind each window is a Christmas scene, or motif. Nowadays, calendars may contain chocolate or candy, sometimes even small toys. The first hand-crafted Advent calendars were produced in the mid-19th century; the first printed calendar appeared in Munich in 1903. Eventually, the custom was exported all over the world.

During the Advent season, the children also write their wish list for Christmas. The wish lists and Christmas letters are sent, for example, to Himmelpfort, the Christmas town in Brandenburg. On Advent Sundays, people often gather to drink hot drinks (e.g. punch, tea, cocoa), eat biscuits, gingerbread and stollen, and read Christmas stories to the children. This custom has existed since the beginning of the 20th century.

On the evening of 5.12 or on the evening of St. Nicholas’ Day (6.12) the children put their cleaned boots in front of the door and wait for St. Nicholas to fill them with sweets, fruits, and nuts. In some families, on one of these two evenings, St. Nicholas and his companion “Knecht Ruprecht” pass by in person. He represents the tamed devil. In the bishop’s robe, with a long white beard, Hydra (bishop’s hat), bishop’s staff and golden book, he visits the children. But he also praises and presents their gifts to the children. The children thank him either with a St. Nicholas poem or a song. A typical St. Nicholas song is: “Lasst uns froh und munter sein…”. Knecht Ruprecht has a blackened face, torn and dirty clothes on his body, is placed in chains and has rod and sack with him. He scares the evil children to remind them of their evil deeds and to exhort them to be kind children.

When the Christmas season opens, Christmas markets also crop up in nearly every German town, large or small. The town squares, normally dark early in the winter months, are lit up and buzzing with activity during this time. Townspeople gather, listen to brass band music, drink beer or hot mulled wine (Glühwein) or apple cider, and enjoy the traditional fare of the region. Sellers sell baked goods, including gingerbread hearts, sugar-roasted almonds, crepes, biscuits, stollen, cotton candy, and other sweets. Christmas tree decorations, seasonal items and handmade items such as wooden toys and hand-blown glass jewellery are also sold. It is always a wonderful atmosphere and to go to the Christmas market is part of Christmas time. The picture shows the Christkindlesmarkt Augsburg. It is one of the oldest Christmas markets in Germany and has its origins in the 15th century.

The German Tannenbaum (fir tree) is usually put up and decorated on Christmas Eve, though some families opt to erect their tree during the Advent season. Decorations may include tinsel, glass balls or straw ornaments and sweets and a star or an angel tops the Tannenbaum. The Tannenbaum is taken down on January 6th, Three Kings Day.

Next to the Christmas tree, a crip is erected, i.e. a small wooden-replicated stable, in which the newborn baby Jesus lies with his parents, the shepherds and the animals. In Germany, the variation in crips is very large. Large nativity scenes are also being built in churches.

On Christmas Eve, December 24th, the Christmas story is read out or performed by children in the church. Even though many Germans no longer go to church regularly, they usually still go on this one day to find peace after a long year and enjoy the Christmas atmosphere. In the evening, you eat with the family and exchange gifts. For children, however, the living room is often closed first and only let in when the candles are lit on the tree and the gifts are set up. Because the gifts for the children are brought by the Christ Child or by Santa Claus. But who is the Christ child? The Christ Child comes at Christmas to deliver the gifts. Unseen by the people, then only the ringing of his bell can be heard. Sometimes you also find a golden hair. In the 16th century, the Christ Child was to be a substitute for St. Nicholas, who delivered the gifts earlier on the night of December 6. The birthday of the Child Jesus should henceforth be the day for the exchange of gifts since in the Protestant Church the worship of saints is frowned upon. But as we can see today, the Protestants have also adhered to the tradition of the feast of St. Nicholas. Germans also have Santa Claus, known in Germany as der Weihnachtsmann (literally, “the Christmas man”), who is a direct descendant of Saint Nicholas.

Both December 25 and 26 are legal holidays in Germany and are known as the First and Second Christmas Day respectively. What originally started out as a church celebration of Christ’s birth has gradually become a family celebration. Businesses are closed, and time is spent visiting with extended family.

Baking Plätzchen (cookies) together and doing Christmas shopping, hanging out together makes Christmas one of the most beautiful times of the year. For me, Christmas means tradition, family, and friends. Christmas is something special and I am looking forward to getting to know new traditions this year.