The Foodies Journal: The Thanksgiving Turkey 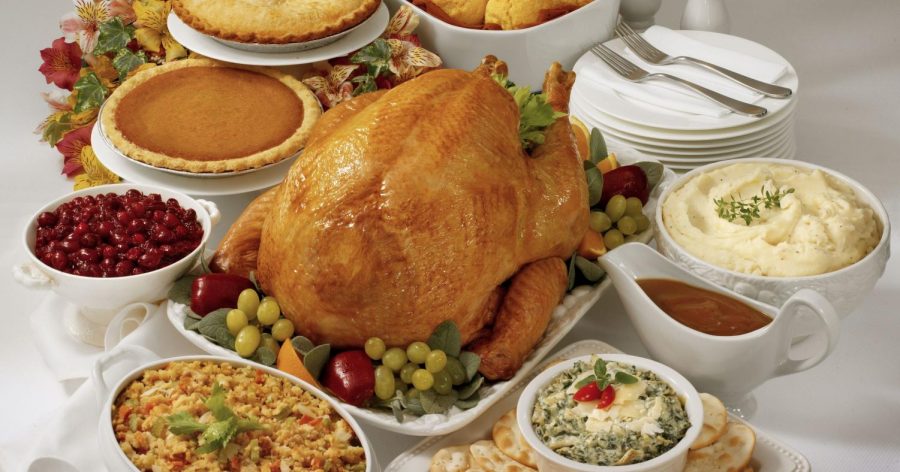 Thanksgiving is that brilliant day of the year when you can stuff yourself to the brim with delicious dishes, and is a tradition that we all love to celebrate with the people we care about and give thanks to the people who helped you get to where you are in life.  However, did you ever wonder how this tradition was created, how it swept the nation of the United States, and how it has stuck for so long?

It all began in September of 1620 when the Mayflower left Plymouth, England on a voyage with 102 passengers on a journey to the new land with the promise of free land for everyone and the freedom to celebrate their own religions. This voyage was 66 days of treacherous sea and sickness, and once they had arrived at land they stayed on the ship for the first winter.  This caused many of these settlers to catch scurvy and many other contagious diseases to the point where the settlers that had initially arrived compared to the ones that survived this disease was cut in half.  In March after their first harsh winter, they all finally decided to move off their ship to land.  Unexpectedly the settlers were greeted by an Abenaki Native American. By now the settlers are starving and fatigued from the rough winter, so when the Abenaki Native American came back with another Native American named Squanto from the Patuxet tribe to help them, it probably felt like an angel had come down from the heavens to help them.

Squanto had a very interesting history with the English, firstly he was kidnapped by an English captain and sold into slavery.  Later on in his life, he escaped from his slavery to London and was able to finally return to his homeland on an exploratory expedition. Although even with his history with English being fairly bad, he still helped the pilgrims get back on their feet.  Squanto taught the Pilgrims how to hunt for fish in the rivers, avoid poisonous plants, and how to cultivate corn.  Squanto also helped the pilgrims forge alliances with neighboring tribes mainly including the Wampanoag tribe.  This alliance remains to be a sole example of harmony between Europeans and Native Americans, it has lasted more than 50 years.

The help from Squanto did pay off, for in November of 1621 the first corn harvest that the pilgrims ever had was proved to be successful, and to celebrate this achievement Governor William Bradford organized a celebratory feast that would be called later on as the first Thanksgiving.  For this feast, Bradford invited allies that he had created and local tribes, including the Wampanoag chief, Massasoit.  This feast would be 3 days long, the specifics on what the menu of this feast had, remains a mystery but what we do know about the first Thanksgiving, and that comes from the chronicler Edward Winslow, who wrote:

“Our harvest being gotten in, our governor sent four men on fowling, that so we might after a special manner rejoice together, after we had gathered the fruits of our labors; they four in one day killed as much fowl, as with a little help beside, served the Company almost a week, at which time amongst other Recreations, we exercised our Arms, many of the Indians coming amongst us, and amongst the rest their greatest king Massasoit, with some ninety men, whom for three days we entertained and feasted, and they went out and killed five Deer, which they brought to the Plantation and bestowed on our Governor, and upon the Captain and others. And although it be not always so plentiful, as it was at this time with us, yet by the goodness of God, we are so far from want, that we often wish you partakers of our plenty.”

Historians do suggest that the dishes that were made and used in the first Thanksgiving used Native American spices and Native American cooking methods because they didn’t have stoves and their resources were limited.  A year later Governor William Brandford held a second Thanksgiving in November of 1623 to celebrate the end of a long drought that had threatened that year’s harvest of food.

Years later the journey of the actual official recognition as a holiday began during the American Revolution when the Continental Congress started designating 1 or more days for Thanksgiving a year.  In 1789 George Washington issued the first Thanksgiving proclamation to celebrate America’s newly founded independence and successful ratification of the U.S. constitution. Then in 1817 New York became the first of several states to adopt the annual Thanksgiving holiday, although the days Thanksgiving was celebrated wasn’t consistent, and the south remained unfamiliar to the tradition.  However, in 1827 a Magazine editor and Prolific writer Sarah Joseph Hale launched a campaign to establish Thanksgiving as a national Holiday. This campaign took 36 years of sending letters to politicians for someone to finally put her ideas into motion, and she was nicknamed the “Mother of Thanksgiving”. The person to put her ideas into motion was Abraham Lincoln who heeded her request in 1863 at the climax of the civil war.  Lincoln agreed to this request in hope that this holiday would help widows, orphans, and veterans of the civil war to recover and to help the country “heal wounds”, Thanksgiving was scheduled to be the final Thursday of November. Years later Franklin D. Roosevelt attempted to move the holiday up a week in an attempt to spur retail sales during the great depression. This was known to be, affectionately, Franksgiving. However, this idea was met with very passionate opposition, and fairly reluctantly Roosevelt signed a bill making Thanksgiving the fourth Thursday of November in 1939.

From then on Thanksgiving lived on and to this day is known as a tradition to many families across America to be a day of giving, and thanking those who have helped us become who we are today and thank those who accepted who we become.  I hope everyone has a happy Thanksgiving and a cozy break.