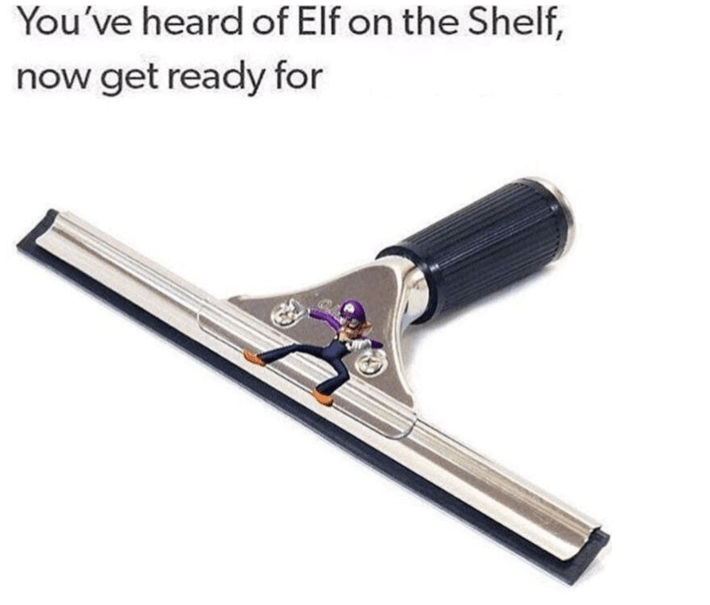 The Elf on a Shelf meme refers to a play on words where two words that rhyme are formed into the sentence “you’ve heard of elf on the shelf, now get ready for…” with a photo of two things that rhyme placed on top of each other. The image is used as a punchline for the joke, and is still hilarious all year round.

September 14th 2017, the meme began to spread widely. A subreddit was created for the meme, where many variations were created and shared on the site. Reddit user @pm_me_your_cheetos posted an image of Shrek standing on a backyard deck, with the phrase overhead. Shrek, already being a popular meme topic, made the meme really take off and got over 200 comments and a 19% upvote. Another example of a popular variation is where Redditor @pebblesom created an image of video game character Waluigi on a squeegee, which gained a 93% upvote and 280 comments.

Popular sites such as Buzzfeed, TIME Magazine and more have made articles on the growing popularity of the meme. This created an even bigger outlet for it to spread and reach more meme creators and social media sites. Twitter users started to get involved, the most popular being when @nsarmoredfrog posted a photo of a plush Pokemon Eevee sitting atop a TV. In just two days, this received more than 27,000 retweets and 58,000 likes.

A more recent appearance of the meme turned up on Twitter once again, where the Twitter account of the Vancouver Airport in Canada posted a photoshopped image of rapper Lil’ Wayne riding an airplane, captioned “you’ve heard of elf on the shelf, now get ready for…”. It gained over 1,000 retweets and 3,400 likes in two days. After this, other airlines accounts started to meme their own versions of the meme, Tampa International Airport responded to @yvrairport’s tweet saying “ok, we see you… but what about Snoop on a Swoop?” with an image of rapper Snoop Dogg on one of their Swoop branded planes.

There are many, many variations and versions of the elf on a shelf meme, making a comeback every year near Christmas time. Everyone is getting involved and becoming a memer this holiday season, spreading across every social media each year. It’s a timeless meme, and helps spread some festive laughs for internet goers throughout the years.